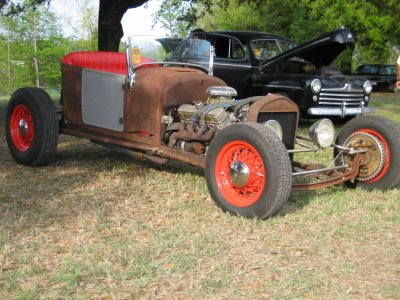 Last week (Wednesday-Saturday) I was in Daytona at the annual Turkey Run car show. This event is held inside the Daytona Speedway, and is one of the largest car shows in the country. This year there were 5,150 participants. That's a lot of cars! Which makes it almost heaven for a gear head like me.

I know I need to quit the car thing, but...but I like 'em. I think I know exactly how Eve must have felt in the Garden of Eden when she looked at the forbidden fruit. She knew she shouldn't. But it was soooo nice and beautiful and desirable. So... she took it. That was me at the car show. If I didn't look, I could resist the temptation to buy quite easily. But I looked. I looked until I could have looked my eyes away(ht Spurgeon).

I didn't buy anything, however, because my car didn't sell. Phooey! But I did see some really cool stuff. I had intended to take some pictures for the blog, but I forgot my camera every day. Phooooey!

The cars that caught my attention the most were "rat rods". Rat rods are a throw back to the days when most of us couldn't afford to have a really nice car, so instead of spending money on the appearance, the drive train (motor, tranie,rear end) received the attention. I think maybe nostalgia is the driving force behind the old car craze.

Anyhoo, these are some pictures of rat rods that I gleaned from other places. Take care as you look at these pictures. Your past is comin' to getcha.

By the way, I suppose that you have noticed that all the cars pictured above are dirty low down Fords. If you will look closely, however, you can see that they each have Chevy motors. They were built Ford tough using Chevy stuff!
Posted by Garry Weaver at 6:25 AM