I mean it! I'm tired of hearing it! Sick and tired! There is almost no refuge left, it seems, where one is not blasted by the "F" bomb. The word has become an adjective, adverb, noun, verb, and gerund in every day usage by multitudes.

Evidently, it has to embody all those parts of speech, because the empty headed people who use it so profusely, don't have a large enough vocabulary to express themselves adequately. I can understand a lack of language skills in those who are unlearned or mentally deficient. However, being ignorant does not give anyone a pass for uttering such vile rubbish.

The appalling thing, to me, is that so many otherwise articulate people who occupy leading roles in society (Teachers, Politicians, Business men, Entertainers, Parents) use it openly without hesitation or shame. They seem to give no thought to who might hear them, nor do they care who may be offended by it. I seem to remember a time when, even those who were even a little over the line in their use of "color" in their language, would, at the very least, take note of who was within ear-shot before they used questionable language. But not any more!

Evidently, it is no longer possible for a comedian to "make it" in the "business" unless he incorporates the most vile language and subject matter that the human mind is capable of conjuring, into his/her act.

I enjoy watching some of the motorcycle/auto reality shows in which they build cars or bikes, but even in those shows, I am constantly subjected to "that word". Oh, sure, they bleep it out, but it comes through almost as plainly as if they didn't bleep it. I know that much of what goes on in those shows is staged, but what kind of message are the viewers supposed to get from hearing an employer flinging the "F" word at his employees, or a father shouting it at his sons?

For the last couple of years, I have been driving a school bus. I had to pick up the side job in order to get the health insurance that it provides. Having been basically living a sheltered life for the last 30 years, I was totally caught off guard by both the conduct and the language that kids use. To hear young boys and girls throw that "word" around so carelessly, breaks my heart. After rebuking one grammar school girl for her shameful vulgarity, I asked her, "Does your mother know that you talk like that?" She replied, "Who do you think taught it to me?"

By the way, I would never, never, no never ever send my children to a public school. I mean, never! Not under any circumstances. Nope! Not a gonna do 'er. Unh, uh.

I believe that this coarseness is an indicator of where our society is, morally. The problem is more than just an ignorance problem. It is a serious spiritual problem. To a crowd of blasphemous people, Jesus said, "O generation of vipers, how can ye, being evil, speak good things? For out of the abundance of the heart, the mouth speaketh." (Matt.12:34) According to what Jesus said in this verse, the reason people say the things that they say, is because whatever is in the the heart comes out through the conversation. People speak evil because they are evil.

Some would love to be able to separate what they are from how they speak, but, alas! that is not possible. Not long ago, I was talking to a professing Christian who is known to be very loose in his language and down right nasty in his humor. He said, " You know, brother Garry, I like to have a good time. I like to tell jokes and see people laugh. Sometimes I'll tell one that might be a little off color, but I don't mean anything by it. God knows my heart. I'm His 100%." I opened my handy little New Testament and read him the preceding verse and said, " Jesus said what you talk about is what you are! " He didn't seem to get too mad at me, but either way, mad or not mad, it is the truth.

While I'm at it, I may as well hit those "sanitized" versions of the "F" word that are so widely used by many, such as: Flippin', frickin', friggin' and other similar words that are just close enough to let everyone know what you mean and just different enough that you can't be tied to a naughty word. Well, I'm tying you to it! You use those forms of the "F" word because you wish you could say the word for real. It is only a thinly disguised substitute for language that no child of God should be associated with.

I'm sorry to keep ranting on and on. And I'm sorry to even deal with such an issue that is bound to leave my readers feeling a little degraded. I know I feel that way, but I really am fed up! So,in conclusion, GET A VOCABULARY! And remember, when you use profanity, it reveals at least two very embarrassing things about you,: (1)That you have an empty head. And (2) You have a wicked heart. The first can be easily remedied by learning the use of a dictionary. The other can only be fixed by a living relationship with God.
Posted by Garry Weaver at 9:55 AM 9 comments: 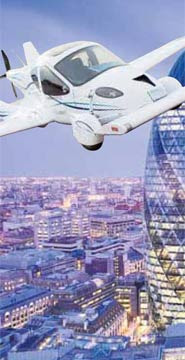 I'D BUY ME ONE OF THESE!!! according to a TIMES ON LINE article , the flying car will be ready for testing in about a month. I wonder how it would look with a set of Corvette rallye wheels!?
Posted by Garry Weaver at 2:20 PM 1 comment:

HAPPY BIRTHDAY TO MY LOVELY WIFE, JAN, WHO IS _ _ YEARS OLD TODAY!