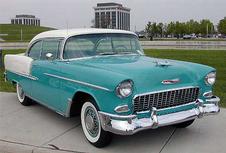 Hey! You gotta admit, that's purdy. See? It's even smilin' for the picture. It is a work of art.It's all American. It's a Chevy. It's old, and I love it. What's not to love about it? It's an amazingly graceful old Chevy.

Before you ask, no, it isn't mine. I found this picture somewhere else on the internet. At present I don't have a digital camera, so I can't post pictures of my stuff yet. Not only that, but I don't yet know how to scan my photos in. Believe me, ignorance is not bliss.

For those who would say that it is extremely carnal for a pastor to love old cars so much, you'll get no argument from me. All I can say is "O wretched man that I am..."
Posted by Garry Weaver at 4:52 PM

Since it's confession time, I must admit that I give people that can't tell the 5, 6, 7s apart an incredulous look, the same look I give pastors who've never heard of Mark Dever, for instance.

There was a 55 I saw in Calgary several years ago that was just perfect. I hate to admit that I still think of it from time-to-time. 10th commandment review time ...

That's a nice five there. Can't say it's my favorite colour, though.

Just don't post any pictures of 66 Chevelles. 'Specially not silver ones with red interiors.

Terry,
I'm glad you were able to discern that the car pictured is a '55. I had it in the title, but when I published it disappeared.

Later I'm gonna post a picture of a '66 Chevelle that I sold about 5 years ago, but it's orange.

Jeremy'
Amen to which?

I'll stick up for you against anyone who thinks this is sinfully carnal, even if you are a Chevy man. O, man, I'm turning ecumenical!